skip to main | skip to sidebar

OSCAR in India with Slumdog Millionaire

Slumdog Millionare has been produced by Christian Colson and directed by Danny Boyle, neither of them is Indian but the fact remains that the body, soul, look, feel, actors, storyline, everything about Slumdog Millionaire is Indian.
The movie gets the 8 out of 10 oscar awards in 81st Academy Awards. A.R. Rehman get's the 2 oscar and he would like to share these awards to indian poeples and he said "Mere Pass Maa Hai".
The film tells the story of Jamal Malik played by Dev Patel who is a contestant on the popular game show “Who Wants to Be A Millionaire?” aka “Kaun Banega Crorepati”. The host of the show Anil Kapoor fails to understand as to how Jamal Malik answers all the questions to perfection despite being born and brought up in slums and abject poverty. The truth is the sheer coincidence of him knowing all the answers based on his experiences while growing up. The narrative is interesting and crisp with two simultaneous tracks running parallel – that of his present and his past.
The entire music given by A R Rehman is the soul of the film. The lyrics and the music might be awesome to the international diaspora but we have seen equally good work by Rahman and Gulzar in the past too. Better late than never.
A few things which confused me was the British accent of the boy who has been brought up in slums. Jamal Malik, who is working as a chai walla in a call centre does not know whose picture is it on an Indian rupee (Mahatma Gandhi). I was also left wondering during another sequence in the film when the show anchor of `Who wants to be...` hands over the contestant to the police without telling the producer of the show. But you do not remember these tiny mistakes by the end and that’s the deal
It might not be a perfect film but really a film which would make you feel very satisfied by the end of it. A touching film. Please go for it. NOW.
Posted by Ravi at 9:46 PM 12 comments:

Shahrukh Khan In the hour of adversity, Shahrukh Khan opened the doors of his home to Priyanka Chopra and Shahid Kapur .

The cast and crew of Vishal Bharadwaj’s movie Kaminay were shooting outdoors at Marine Drive on November 26 when terrorists attacked several hotspots of the city. Learning about the attacks, the unit packed up hastily and left for home.
However, according to reports now emerging, when Priyanka and Shahid were going home, they learnt of another terror attack in Juhu, where they were headed. With nowhere left to go, the duo reportedly called Shahrukh whose bungalow Mannat was nearby
The superstar invited them home and did not let them leave the place until morning when the police had surrounded the terrorists and the Juhu attack turned out to be a rumour.
Reports say SRK and Gauri Khan played good hosts.
Priyanka has on more than one occasion said that she is very fond of SRK with whom she has worked in Don . She is also doing a song appearance in SRK’s Billu Barber .
source: http://www.humsurfer.com/
Posted by Ravi at 10:57 PM 2 comments: 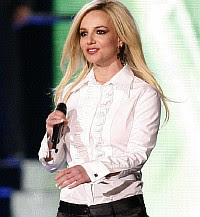 Britney Spears has kept a rather nail-biting resolution for the New Year—the pop star wants to quit chewing her fingernails in 2009!
The Womanizer singer wants to take better care of her hands starting New Year – because she longs for manicured and attractive hands. And thus she is determined to quite her dirty habit as well as get rid of the reason behind it—not to worry anymore.
"Next year, I have to learn to stop biting my nails! I would like to stop worrying so much, because I worry all the time. And to learn how to be happier, just in general. I have to learn to take things not so seriously,” she said.
However, the pop superstar is not sure if she’d be able to stick to her promise, as she doesn’t have a good history of keeping her resolutions. "I end up breaking them. It's hard,” she added.
source: http://timesofindia.indiatimes.com
Posted by Ravi at 9:54 PM No comments:

Kats to do a Parveen Babi? We have learnt that Katrina Kaif is in the running for the role portrayed by Parveen Babi in Amar Akbar Anthony in the remake to be directed by David Dhawan. The film will also star the three Khan brothers - Salman, Arbaaz and Sohail- in the lead role.Katrina’s spokesperson tells us, “We are in talks with David. The role was offered to her but the shooting of the film will not happen so soon because first she will be completing the Partner 2 sequel. Currently she is busy shooting with Ranbir for a Rajkumar Santoshi film.”

If she agrees, this will be the second time after Main Pyaar Kyun Kiya that Salman and Katrina will romance each other on screen. Sohail Khan is producing it and it is likely to go on the floors early next year after Salman completes his film Veer with Anil Sharma. The actresses who will play the roles of Shabana Azmi and Neetu Singh have not been finalized.Incidentally, the film is also being remade in Bhojpuri titled Amarva, Akbarwa, Anthonywa.About Amar Akbar Anthony (1977)Amar Akbar Anthony is about three brothers separated during their childhood who grew up in three different homes, adopting three different religions.The film was directed by Manmohan Desai and starred Amitabh Bachchan (as Anthony Gonsalves), Vinod Khanna and Rishi Kapoor. Opposite them were Parveen Babi, Shabana Azmi and Neetu Singh respectively. Nirupa Roy, Pran and Jeevan were the supporting actors. It is considered one of the best comic films in the history of Indian cinemaThe film was later remade in Telugu as Ram Robert Rahim (1980).
source:http://www.chalo.net/Entertainment
Posted by Ravi at 10:35 PM 1 comment: The secret behind the chemistry between Vidya Balan and Madhavan in the Airtel ads is out.

It is Madhavan's two-year-old son Vedant.The child bonded so beautifully with Vidya on the sets of Guru that she became a part of Madhavan and his wife Sarita's inner circle.In fact the cell phone company has now decided to put out a series of ads featuring Madhavan and Vidya as a couple connecting emotionally on the phone. Madhavan has been running in and out of Mumbai to complete these ads.
"Initially I was only the brand ambassador for Airtel's southern market. But now they've signed me on for the whole country,

" Madhavan said."We've shot a series of ads with Vidya and me. For the last one week I've been running in and out Mumbai and Chennai. During the daytime I'm in Chennai shooting for a Tamil film. Then I take a night flight to Mumbai to dub for the ads," the southern star said.Curiously, Maddy, as Madhavan is fondly known, and Vidya have hardly shot together for these ads about love and togetherness.
"We've just done one shot together. The rest has been shot with the two of us separately. It's strange people have noticed so much chemistry between us when we aren't even together in the ad. My wife Sarita loves the ad. She thinks Vidya is better than me in the ad. But then she's my harshest critic. All three of us Sarita, Vedant and I adore Vidya," he said.Vidya has done ads prior to her acting career. This is her first ad after starring in films.She thoroughly enjoyed the experience.
"Years ago I was supposed to do a Tamil film with Maddy. Then we were also supposed to do a Deepa Mehta film together. I think Maddy and I were destined to do special things in limited space," says Vidya."Both of us had cameos in Mani Ratnam's Guru. People still talk about our romantic scene in the rain (including a kiss). And now the Airtel ads. It's unbelievable how much chemistry people have seen between us in those few seconds. I always say it's the moments that make a romance," she added.
source: http://www.zimbio.com/Vidya+Balan/articles/47/Secret+behind+Madhavan+Vidya+Balan+chemistry
Posted by Ravi at 3:49 AM No comments:

We have a leading escort agency based in Delhi,...
classifieds
flat 1 bedroom
acheter carrosserie